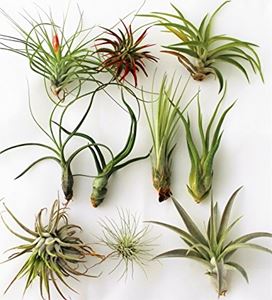 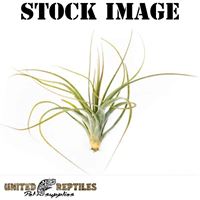 Tillandsia concolor-Small Plants
This is a beautiful stiff-leaved species from Mexico and El Salvador.
Blushes red when in bud, producing beautiful red and green multiple bracts which last for months.
Pink tubular flowers emerge from each segment of the bract.
Another Tillandsia that thrives in full sun, eventually becoming a huge cluster.
An easy grower with long-lasting color. Single plants
R 29,00 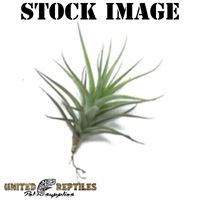 Native to southern Brazil, Paraguay, Uruguay, and Argentina, the Tillandsia aeranthos is often known in these regions as “Claveles del aire”or “carnations in the sky.”They grow throughout varying altitudes including just at sea level to higher regions above sea level. In the wild, aeranthos air plants are often pollinated by hummingbirds.
R 95,00 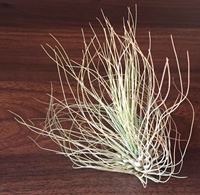 The Tillandsia Argentea originally grows in dry areas in Mexico, Guatemala, Cuba and Jamaica. This Air Plant grows as a single, as well as in clusters of multiples of the same species and has very thin silver(ish)-leaves. The Tillandsia Argentea barely has roots and mostly grows on rocks and trees. The leaves of this air plant grow in a loose way and the spike of the plant grows purple flowers from the centre.
The Tillandsia Argentea is very easy to care for and to use in bouquets, arrangements and other decorational purposes for example. This air plant likes an airy and a bright/light environment the most. Besides that, it likes to be sprayed once or twice a week (depending on the humidity)
R 58,00

Tillandsia brachycaulos multiflora, a bromeliad sometimes called an air plant! Flowers are blue and the entire plant colors shiny red when ready to bloom, large plants 6 inches across! Easy to grow, you can glue it to a board or in a seashell, water occasionally and it will grow and bloom.
R 29,00 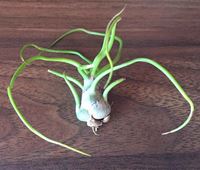 These huge Bulbosa Belize are even more impressive when they bloom! They have bright green, waxy leaves and wonderful pink, red and purple bloom colors. These are very large 6 to 8 inch plants. The Tillandsia Bulbosa truly is a dark beauty of an air plant, Tillandsia Bulbosa prefers coastal areas, strands and hammocks. It thrives in hot and humid environments, like cypress swamps
R 35,00

Tillandsia tenuifolia, sometimes called the "narrowleaf airplant" is an evergreen, caulescent, perennial, forming small clumps with leaves arranged into thick rosettes. This species is monocarpic (each rosette bearing fruit only one time during its existence).
R 112,00 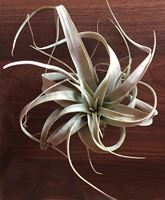 The Tillandsia xerographica is a beautiful and relatively large species within the various Tillandsia species. It is also called the ‘King of Air Plants’.
The gray / silver colored leaves that grow from the heart towards the butt, makes it a really exclusive and decorative plant to have and use.
R 265,00