A tetra is one of several species of small freshwater fish from Africa, Central America, and South America belonging to the biological family Characidae and to its former subfamilies Alestidae (the "African tetras") and Lebiasinidae. The Characidae are distinguished from other fish by the presence of a small adipose finbetween the dorsal and caudal fins. Many of these, such as the neon tetra (Paracheirodon innesi), are brightly colored and easy to keep in captivity. Consequently, they are extremely popular for home aquaria.

Tetra is no longer a taxonomic, phylogenetic term. It is short for Tetragonopterus, a genus name formerly applied to many of these fish, which is Greek for "square-finned" (literally, four-sided-wing).

Tetras are small sizes fish that do well in schools or groups of 4 or more fish. They do require some attention to the water qaulity and vulnerable to more aggresive tank mates. Availible in a large variety to suite eveyones needs. 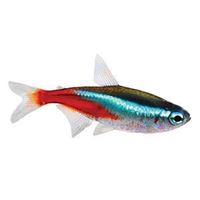 The Neon Tetra is often described as the jewel of the aquarium hobby. It is easy to see why it is one of the most popular freshwater tropical fish.
With its iridescent blue body and bright red tail, Paracheirodon innesi creates an exciting splash of color in any aquarium, especially when kept in schools of six or more.
$1.17 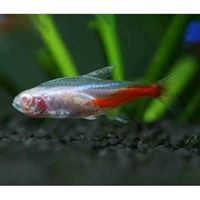 The Neon Tetra is often described as the jewel of the aquarium hobby. It is easy to see why it is one of the most popular freshwater tropical fish.
With its iridescent blue body and bright red tail, Paracheirodon innesi creates an exciting splash of color in any aquarium, especially when kept in schools of six or more.

The Ember Tetra is a gorgeous fish that will light up any aquarium.
They are a peaceful fish, active and playful, and because of its size and ease of care, it will suit both a nano tank or a community aquarium making it a popular fish for any aquarist.
$1.11

The Cardinal tetra is arguably the world's most popular aquarium fish species. It is similar in appearance and often confused with the Neon tetra.
$2.61

The Black Neon Tetra has a peaceful nature, very energetic and is an excellent addition to any community aquarium.
However, it is advisable not to house them with large, aggressive fish, or they may be outcompeted for food or eaten.
These Tetras are a schooling fish and prefer to be in groups of at least six.
$0.98

The black phantom tetra is a peaceful, very active schooling fish and an excellent choice for any community aquarium. It is best maintained alongside non-predatory and similarly sized fish.
$1.63

Cochu's Blue Tetra (Boehlkea fredcochui), also known as the Blue King Tetra, is an excellent choice for many medium to large community aquariums, especially planted aquariums.
It is one of the few freshwater aquarium fish that has bright blue coloration.
$2.29 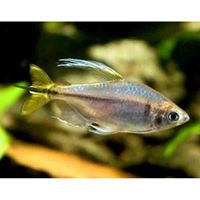 The Congo Tetra is considered by many to be the jewel of tetras in the home aquarium because of its natural beauty.
They have flowing fins that some have described as shimmering and the main color tends to be silver with an orange glow.
Congo Tetras do well in a peaceful community aquarium that is well lit and moderately planted.
They prefer to swim in schools of 5-8 in an aquarium that has plenty of room.
It is best if this fish is the dominant species in the tank or it may become shy and reclusive.
$4.12